The fundamentals of a company, a sector or an entire country’s economy rarely turn on a dime. They improve or deteriorate slowly, and often imperceptibly, over longer periods of time. And when they turn, even the turn itself can seem interminably long.*

The prices of stocks, however, can and do turn on a dime. They move faster and more aggressively than anything happening with the issuer’s fundamentals. And yes, by extrapolation, entire sectors or country stock markets do the same.

The fact that stocks and stock markets can turn on a dime is one of the most frustrating aspects of investing. Just when most investors have told themselves the same story so convincingly and memorably, the story changes. But not everyone is ready to abandon the story they’ve embraced all at once.

This turning on a dime business also makes technical analysis difficult for people to accept. If everything you thought last week is now the opposite this week, why should I listen to a word of any of it? Smart technicians speak in probabilities and not certainties regarding outcomes. They also describe their opinions in terms of if, then:

If that lack of conviction frustrates you, you probably aren’t cut out for markets, anyway.

2018’s market turned on a dime. The difference between momentum in January versus momentum in December was night and day – there’s no chance the underlying fundamentals of the US economy changes to the degree momentum did during the course of the last year. Here’s Jon Krinsky, looking at Relative Strength (RSI), a widely used measure of momentum – it’s my Chart o’ the Day. Readings above 70 or below 30 are considered to be above or below the thresholds of “extreme” momentum, good or bad…

What a Difference A Year Makes

In January, the SPX’s weekly RSI exceeded 90, its highest on record. In December it hit 31, the lowest since 2011. It’s easy to say that 2019 will settle somewhere in between, but a failure to hold above the 50 level on the next meaningful rally would be a negative tell for the medium-term. 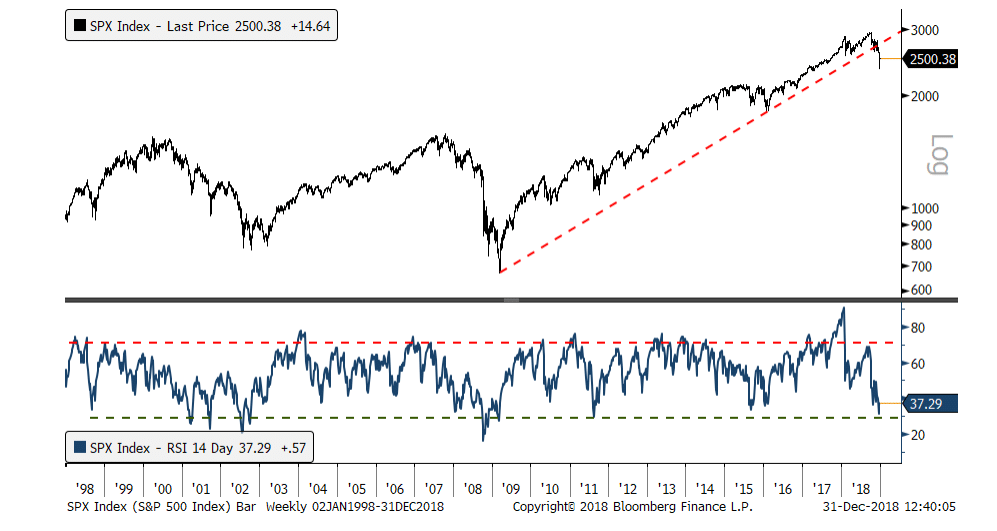 To have the highest RSI on record to begin a year and then end plumbing the depths of recent history – that’s quite a turn. It didn’t announce itself, it just happened. In January, there wasn’t a single indicator that could have warned you. The only preparation for this sort of thing is to be armed with historical context – and the history of markets suggests that anything can happen, at any time. Hence the need to build strategies that can endure all events, even low probability ones.

* there are exceptions to this, of course. one-drug biotechs absolutely can see their fundamental outlook stop on a dime and reverse, from something like a partnership announcement, an insurance company approval, an FDA approval, etc. There are others.