Amazon’s purchase of Whole Foods put a highly discussed dent in all the retail grocery stocks, of which Costco is perhaps the most highly regarded. It’s probably an overreaction, but time will tell.

In the meanwhile, the stock really hasn’t gotten all that cheap on this recent slide.

Below, the share price in blue versus the trailing twelve month price/earnings ratio in orange. PE is still 28, a substantial premium to the sector as well as the overall stock market, which itself sells at a historically high multiple: 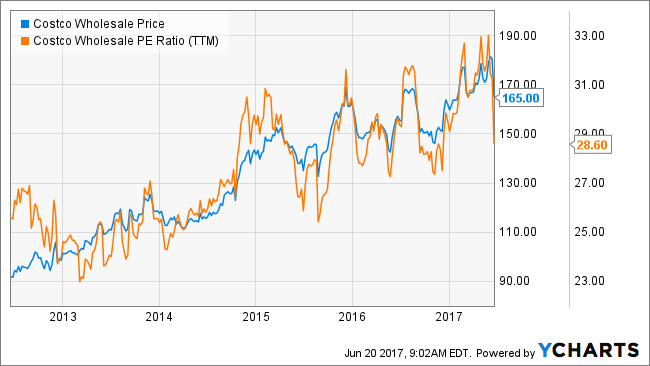 Below, the trailing PEs for the biggest names in the space. Costco shares are still very much getting the benefit of the doubt, relatively speaking: 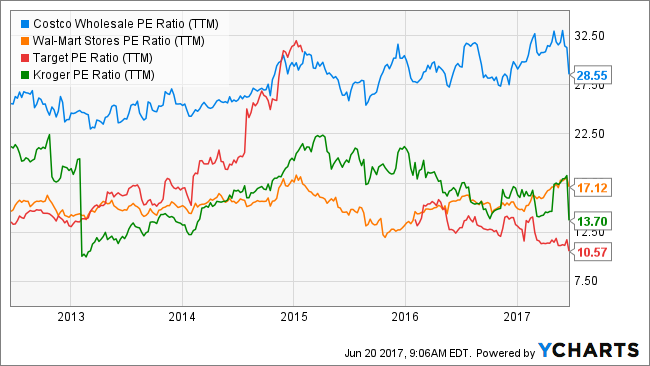 Fundamental investors would point out that this premium multiple is still justified given that last quarter, Costco grew earnings by 28%, with Target and Walmart earnings growing 17% and 2% respectively. Kroger posted a negative 54% earnings decline in the most recent quarter. Additionally, Costco’s revenue growth of almost 8% last quarter stands out versus the group. Target and Walmart were flat year-over-year.

Competitively, I would guess that the Costco membership model holds up and that its own ecommerce methods will enable it to continue to thrive. However, it may do so while having trouble hanging onto that high-twenties earnings multiple. This is the squishy part of stock selection where knowing what the earnings might be isn’t going to help.

How can you possibly know what multiple investors will be willing to pay for those earnings, even assuming you can nail them (which you can’t, IRL)?

In an industry that is only beginning to feel the full force of Bezos & Co, it’s probably smarter to assume that current multiples will all be called into question by investors attempting to handicap a radical future.

First-level thinking would be to snap up high-quality Costco after this recent plunge because there’s been an overreaction – after all, hasn’t Amazon been competing in groceries for a decade at this point? Second-level thinking would be to say, yes, everyone is aware that Costco is high quality and that there’s been an overreaction – but what if the overreaction is merely a prelude to a new status quo, where multiples shift permanently lower owing to a new level of competition in the game?

I have no position in the stock. If I were long, I’d be using a bounce as a selling opportunity, not a reason to wipe my brow in relief. This ain’t over.