Today’s guest post comes from Michael Gouvalaris, who is a self employed Equities trader and  portfolio manager. I rarely publish guest posts but I thought Michael’s way of looking at the long-term technical setup was unique and deserved more attention.

Rarely do I spend time talking about the very long term and the history of stock market prices going back decades. Most of the time is devoted to short term direction and forecasts. But I feel spending some time looking at historical market patterns is warranted due to the environment we find ourselves in.

I begin with this chart above, a yearly chart of the Dow Jones Industrial Average going all the way back to 1900. I’ve highlighted each major swing high and low. Now let’s notice the patterns I have highlighted. In 1932 due to the Great Depression the market bottomed out and created a generational low. 34 years later we entered a long term trading range for 16 years (similar to one we have broken out from). From low to high the Dow put in a 2365% gain in those 34 years!!!

The next major market move originated when the DOW made the next generational low in 1974. The major averages had lost almost 50% from their all time highs when that low was put in. Another 34 year rally proceeded from that low to exactly the year 2008. From low to high the DOW gained a stunningly similar 2390%.

Now I’m sure during those generational lows of 1932 and 1974, buying stocks didn’t “feel” like the right thing to do. The sentiment in regards to our future was very dim and uncertain on both occasions, much like it is now. And that is precisely my point, if there was no uncertainty the markets wouldn’t have ever traded that low in the first place. The fundamentals almost never support the beginning stages of long term macro bull markets like the two we just identified. If they did support it the market would not have been hit that hard in the first place!!!!

Secondly the markets will always favor the upside over the long term because of pure math. The downside risk is 100%, that is the worst case scenario. While your upside is unlimited. We just saw two separate cases of long term macro bull markets that produced over 2000% returns while the declines maxed out at around 55%. Do you see where I am going with this? Institutions adopt this mindset, they look at the 2000% upside over time after a historically oversold decline, as opposed to the downside risks in the short term. It’s easy to blame the PPT, the Fed and a whole plethora of others for market rallies in the face of “headlines” and slow data. Ironically it is almost always the same ones that have gotten monetary policy, QE, fiscal policy etc, completely wrong from the very start. I hope now that we shed some light on the risk/reward nature on the big picture approach we can use rationale in our analysis going forward. For much of the “analysis” out there holds little to no real value other to keep you scared/greedy and on the wrong side of the markets.

Now I know there are those that will say, that was then and this is now. It’s different this time. Well I realize that most people will only hear what they want to hear regardless of all the data and charts in the world. My intentions are only to get people to think logically about things they can quantify and thus control not to convert everyone to a common form of thinking and reacting.

To those people I offer this bit of analysis. So many want to compare the problems we face now with what went on during the Great Depression. And wholeheartedly believe we are on the cusp of a similar style market melt down. The media feeds on this, so let’s look that fear right in the face and see what we can find.

Although I didn’t highlight it, the chart above shows the crash of 1929 which eventually bottomed in 1932. The Dow dropped over 80% in that time period, of course after that, a rally over 34 years and 2365% proceeded, but you will rarely hear or read about that bit of information. But could we make the case that our great depression in stock prices has already occurred? I can and I will! 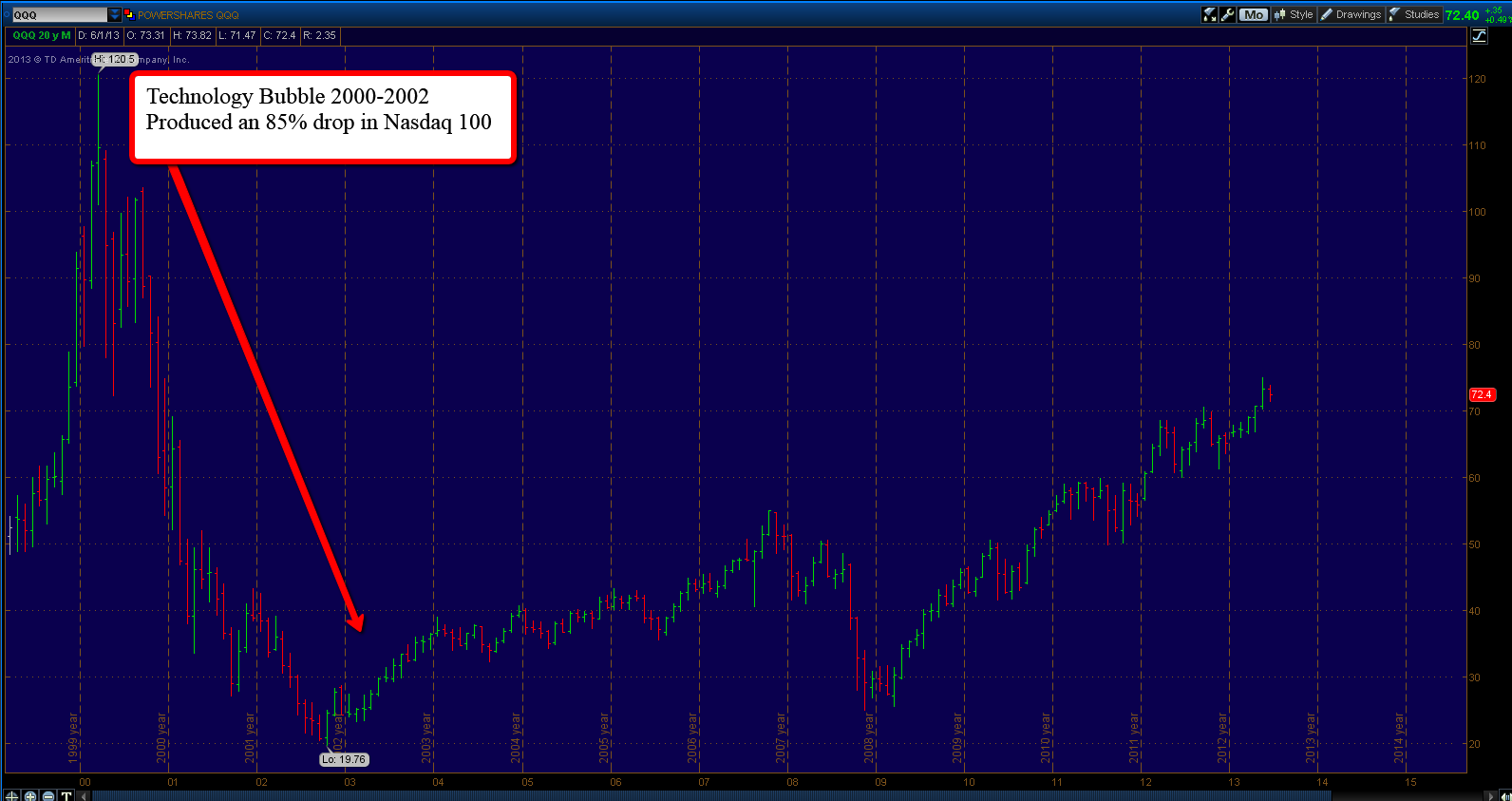 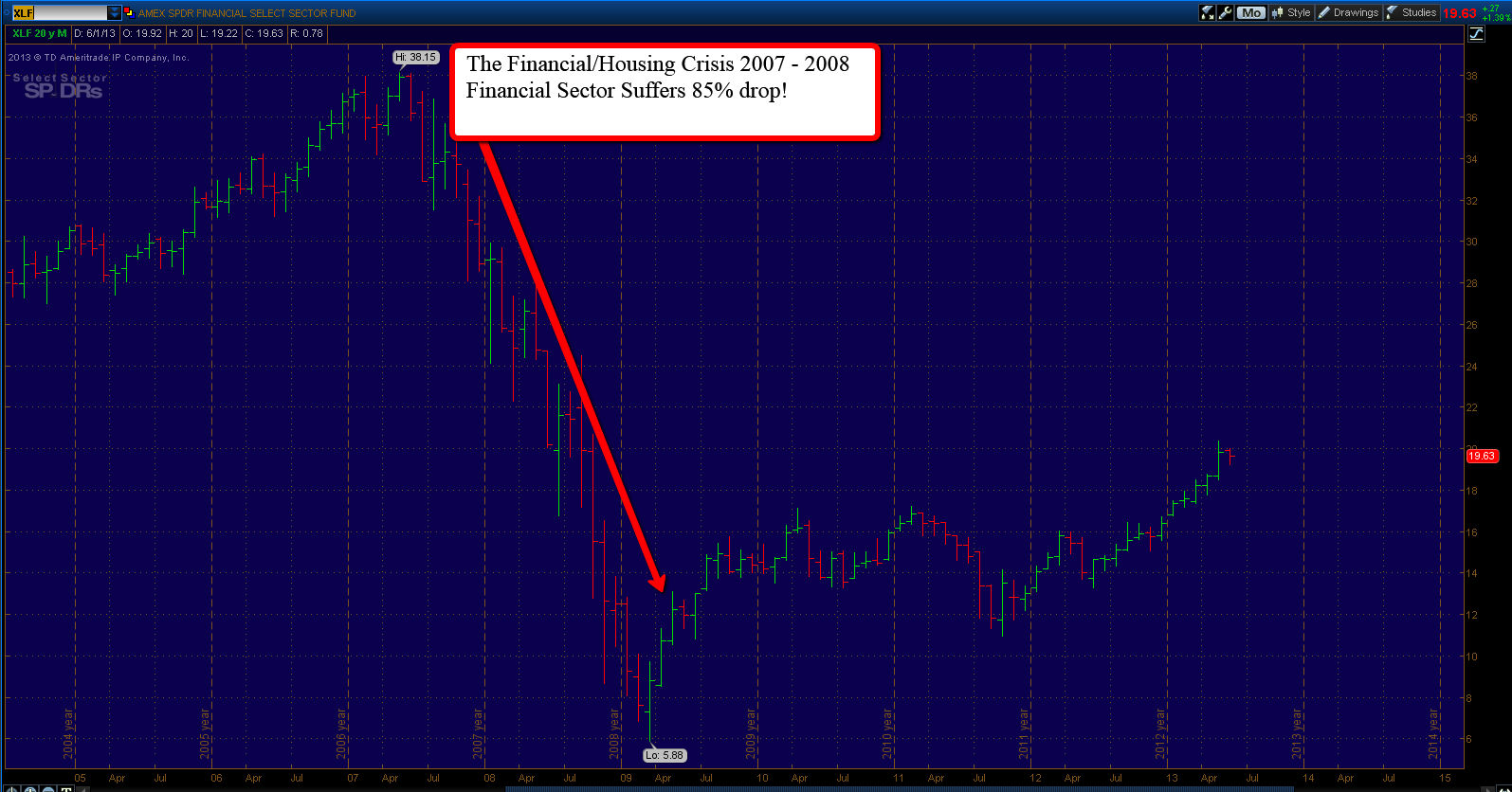 There are two charts above, I believe it’s safe to assume the two biggest and most important sectors of the US economy are Technology and Finance. In 2000 – 2002 the top chart above shows the NASDAQ 100 Index, it shed 85% of it’s value. 5 years later the Financial sector during the housing and financial crisis shed an equal amount of roughly 85%. So during this “lost decade” of stock market prices not only did the major averages hit historically oversold levels but also each of the major sectors of the US economy ALREADY suffered depression level declines! So people will tell you we’re in the Great Depression 2.0 or are going to face it in the near future. Ironically it is the same people that will tell you the market is rigged, being propped up and not allowed to fall. I hope at the very least I have debunked this myth.