Bruce does some really great work, I usually catch it via his contributions to Zero Hedge in my feed reader.  The big question of the weekend is whether or not higher prices at the pump are about to put a fork in the economic recovery.  Bruce is looking at areas where the heaviest concentration of domestic (Canadian) crude oil supplies are keeping prices reasonable – and why that won’t save us on a national level…

Consider this map of the country. The green area is where the Canadian crude is helping to keep prices lower. The dark red areas are those that are dependent on the high-priced, imported crude. 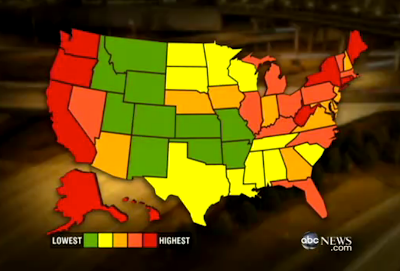 Gas prices are north of $5 in southern California today, but they are as low as $2.95 in Ft. Collins Colorado.

While this may make the folks in Colorado and North Dakota happy, it will crush the national economy. It doesn’t matter what happens in Co. or N.D., they have (relatively) no cars.

A few years ago, the Highway Transportation Department put out a report on registered vehicles by state. The total of all registered vehicles was 244,000,000. Of that total, 33 million were on the roads of California (13%), only 1.8 million (0.75%) were in Colorado, and a measly 700k (0.25%) were in North Dakota. The total of vehicles on the road in the states that are in red in the above map comes to 137 million. Fully 56% of all vehicles are in high cost states. Only 15 million vehicles (6% of total) are registered in the green states!