I believe in the cyclical nature of markets and mean reversion.  Markets always mean revert over time.  The question is what time frame?

I’ll never forget the day that a trader on our team remarked that he was sick of getting into spreads “too f**king early.”  Being early to a winning trade is the same as being wrong, so my trading partner and I set about building a tool that would help us minimize these scenarios.  When we were finished, we had something we were quite proud of.  We named it the Time Fractal Efficiency algorithm.

The start of our process is detailed in my earlier post about identifying fractals.  Here are some examples of varying degrees of fractals (large to small). 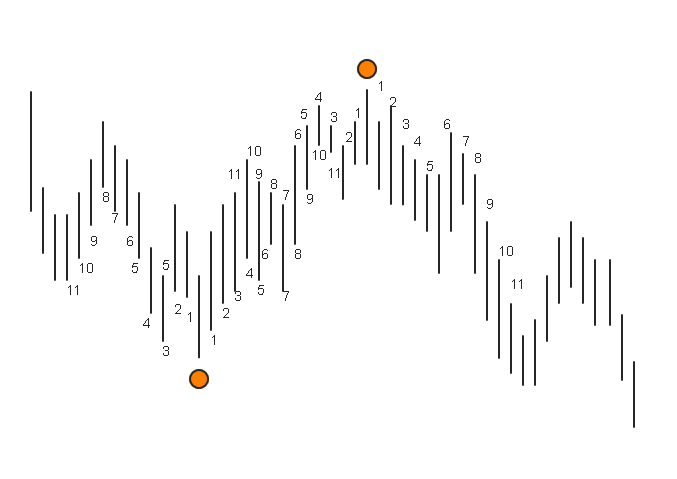 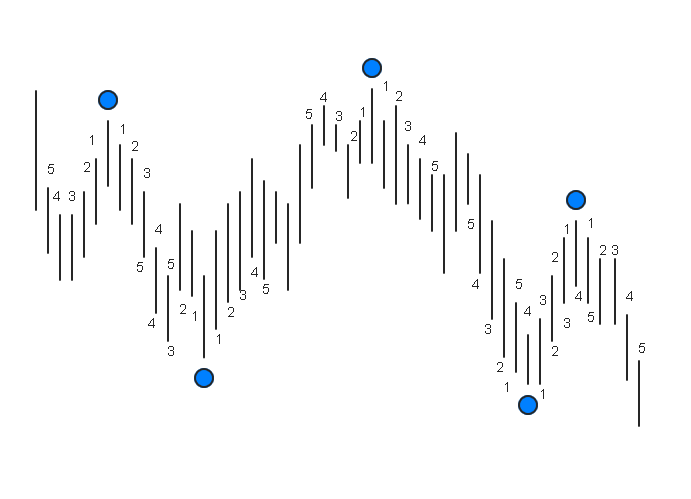 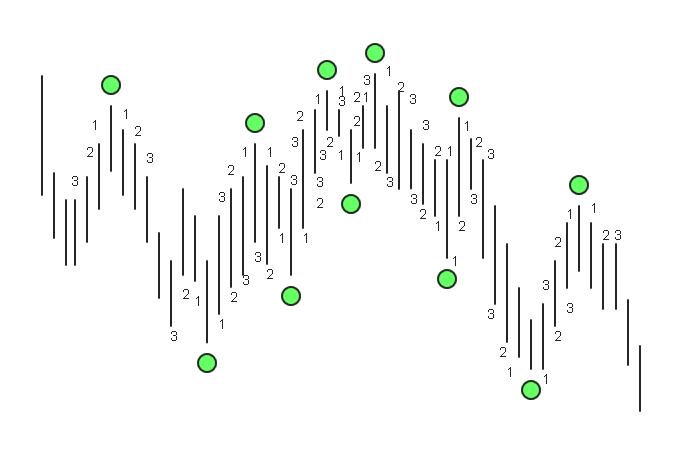 Now lets look at a real life example of the spread $ACE – $CB.  Below is a daily chart with the fractals marked as swings denoted as “U” for upswings and “D” for downswings. 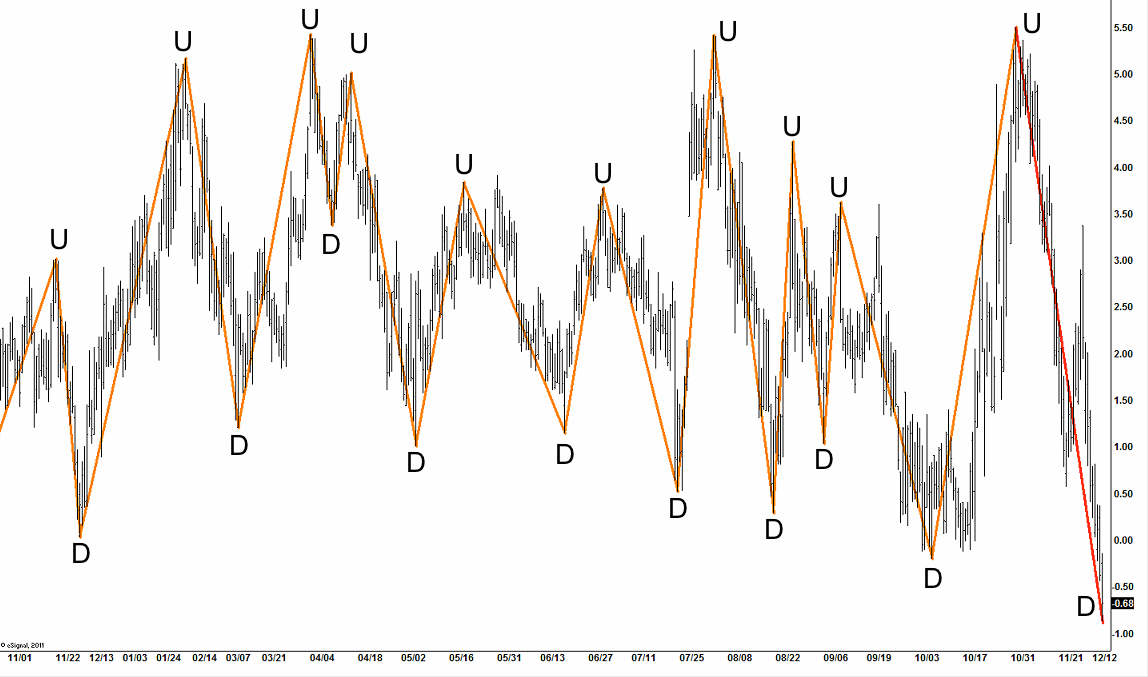 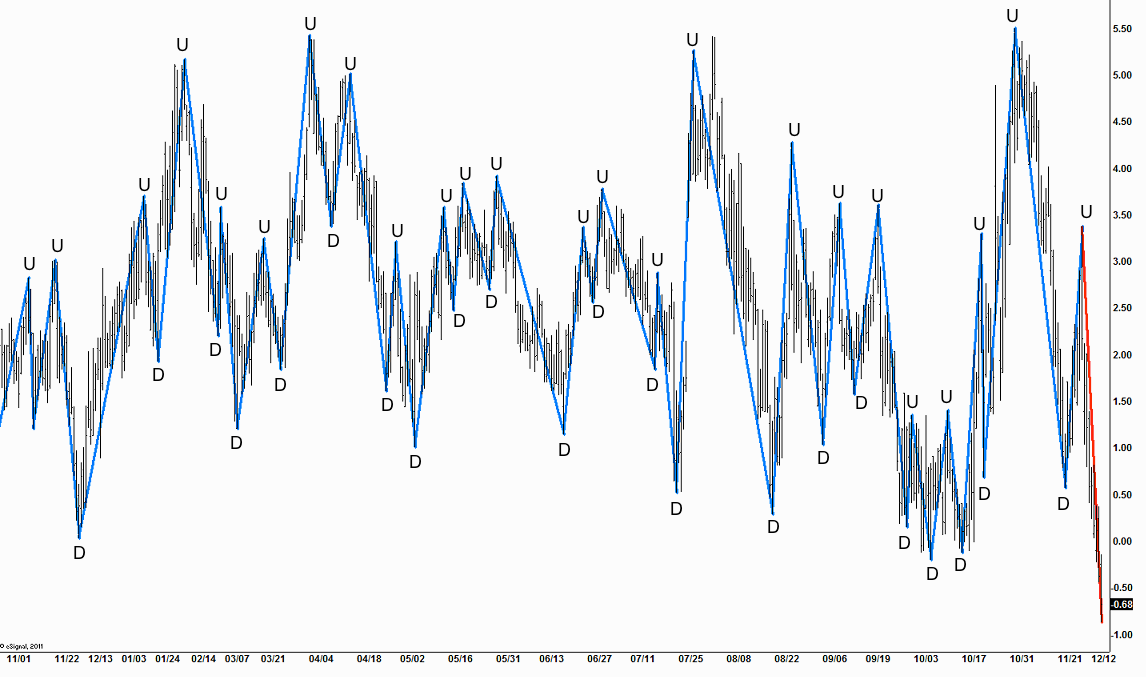 We already know how to measure standard deviation of a spread.  What we have less data on is time and how long trades will take to play out.  We sure as hell don’t want be too f**king early.  Some people use the spread half-life to determine to average time for reversion.  The TFE gives similar data but can give you a more detailed look based on trader inputs.  The TFE algorithm computes the average distance in time from upswing to downswing (U to D) and downswing to upswing (D to U) of the designated fractals.  It tells you how long the average upswings, downswings, and total cycle have taken in the past.

Using the $ACE – $CB spread data we get:

Let’s say you’re looking for a trade on the short side of the $ACE – $CB spread and it moved all the way to the top of the range (and two standard deviations) from here in 6 sessions.  Some traders might take a quick trade short just based on the speed and velocity of the move, but you’re not looking for a full round trip.  The spread will likely pull back and then continue to break out higher; fulfilling the 11-bar fractal at much higher prices.  In this case I would only want to trade the business as usual move and wait for it to stretch closer to 19 days.  Why?  Because time and distance are both important.

Now, lets say you’re trading a spread on a short time horizon looking for one of these 3-bar fractal moves.   You thought you had a great entry but you’ve been in the trade for 5 days and the spread has not moved in your direction by a meaningful amount.  It may be time to just move on from the trade because the 3-bar TFE is 6 days and you’re window of opportunity may be closing.  The trade may be moving to a different time frame that will take longer to resolve.

In another scenario you’ve got a trade that you’ve taken a perfect entry on and the position moves in your favor immediately.  You’ve been patient in your entry and stalked the trade for some time looking for a big move.  You’re in day 5 and things are going well.  Problem is you’ve got a huge open PnL staring you in face everyday and you’re dying to take the position off to lock in the gain.  If this really is the big winner and the entry was a good one, it has another 11 days of profit potential that you’d be leaving on the table if you lift the trade now.  In this case the TFE will help you not cut your winner short.

Now consider another trade where you’re trading again on a longer horizon looking for a big move.  You’ve been in a trade for 14 days that’s going your way but hasn’t matured to the anticipated profit target.  It’s time to consider taking the trade off or tightening your stop.  Sometimes you have to take what the market gives you.

The TFE can also give you an indication of a spread that may begin to trend before it actually breaks range.  Consider the $ACE – $CB spread.  The 5-bar TFE has been skewing towards longer duration downswings for several months, foreshadowing this break of range and the need to be patient when adding to any long position.

This tool is all about managing the marginal and losing positions and not letting small loser turn into big ones.  It’s also about screening out potential problem spreads and not getting into trades too early.  Nothing worse than having the analysis right but jumping in too early and getting run over before the trade starts working.  The TFE gives you clues as to what is considered normal extreme behavior (opportunity) and what is considered abnormal extreme behavior (trouble).