I’ve been saying this for a few weeks now, and maybe the Fed simply sees something that the rest of us don’t, but existing home prices jumping 20% in a year doesn’t quite scream S.O.S. to me. It doesn’t seem to require a relentless stream of billions of dollars in asset purchases.

In my town, on the south shore of Long Island, houses are listed at 10 o’clock in the morning and by 5 pm they’ve been sold. Every homeowner thinks their house is worth a million dollars simply because a million dollars is accessible to more buyers than ever before. Thank the wealth effect from the stock market and the cheapest borrowing rates in history.

Free money is combining with the constrained supply situation from the economy’s reopening to produce huge disruptions and distortions. There’s a lumber shortage for building. You can’t get appliances. You can’t get a plumber. There’s a f***ing swimming pool waiting list. Who ever heard of such a thing? You can’t find a handyman to change a lightbulb. You could leave a trail of hundred dollar bills to your door and still not find any takers for your job, large or small. The landscapers are working day and night to keep up.

The builders won’t build at a loss, so what little supply exists is being snapped up like white truffles in September. Have a look at this chart of housing inventory via Ben: 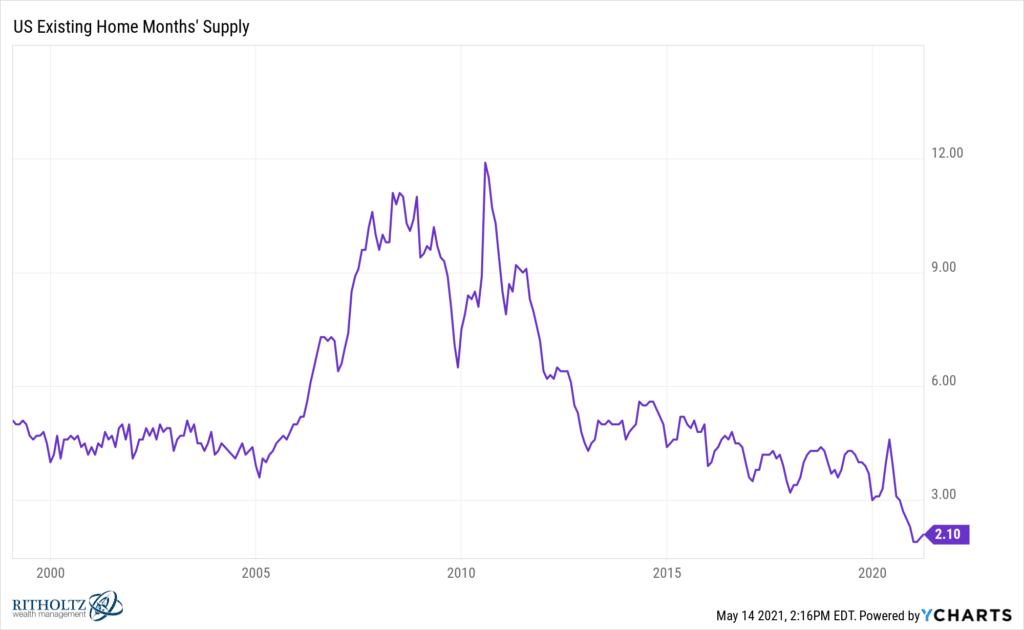 Yes, you are reading that correctly. We have two months’ worth of single family homes available for purchase. And ceaseless demand as tens of millions of Gen Y households are forming.

So, remind me – why on earth is the Fed signaling that they’ll continue to buy mortgage bonds to the tune of $40 billion worth per month, every month, as far as the eye can see? What exactly does this accomplish? What are we missing?

The economic data this week shifts more so to housing with the NAHB builder survey today, housing starts tomorrow, the weekly mortgage apps Wednesday and existing home sales on Friday. The lack of inventory, skyrocketing costs and aggressive price increases will remain the theme. We also hear from more Fed members including Fed Chair Clarida today but we’ve already heard from many of them over the past few weeks so don’t expect anything new. If there is one topic they ALL seem to be avoiding answering with any specificity it is housing. Because they decided again to allocate credit to a preferred part of the economy, aka housing, via the purchases of MBS, it then becomes caught up in the general debate on when they feel it is time to pullback and they can’t seem to separate it out. I mean they are literally pouring fuel on the hot housing market and seemingly have no qualms about it. The result is a stagflationary situation where growth is slowing while costs and prices propel higher which then leads to more renting that eventually shows up in higher CPI and PCE stats.

This weekend’s Barron’s had a big story about inflation on the cover. Here’s Lisa Beilfuss explaining why a lot of this stuff isn’t showing up in the official data (yet):

Measuring housing inflation isn’t straightforward. People consume shelter, not homes, the logic goes, and so government economists calculate “owner-equivalent rent”—or how much homeowners say they would have to pay in rent—for inflation metrics like the CPI. Given housing’s 40% weighting in the core CPI, it is all the more awkward to watch the shelter component run around 2% as home prices explode month after month.

Even setting aside methodology complaints, there are red flags in the shelter numbers that we do have. Solid, consecutive monthly increases in the CPI’s owner-equivalent rent component have come five months earlier than expected, says Citigroup economist Veronica Clark. She says home prices lead rents and pull up the price of shelter with a lag time of roughly 12 to 18 months; home prices started climbing just over a year ago.

The Fed will remain data-dependent in deciding when and how to stop stimulating this market. Those of us in the real world will continue to be slapped in the face with anecdotes until they pile up high enough to be considered “data” by the Maesters in their Citadel. How long will we wait? How out of control will things be by then?