The reality of the investment management business is that investors will not often stick with something that appears to be “not working” for an appreciable length of time, even if all of the data and evidence in the world can prove to them – on paper – that it will work in the long-term.

Life is not lived on paper. Life is not lived in the long-term. So around three years is probably a pretty good guess as to the period time during which an investor will be patient enough to maintain a particular investment philosophy. And then a new one comes along that is, perhaps, more appealing in a given market environment – this isn’t working anymore, look at what happened this month!

As advisors, our number one responsibility to investors is to do everything within our power to set them up for success. Part of this means delivering financial plans that are durable enough to withstand life events that cannot be perfectly planned for, like sickness, scholarships, career opportunities, divorce, the sale of a business or the death of a patriarch or matriarch. But another equally important part is to allow for the fact that clients are human in the way we invest their money. This means that we must think about the types of cues that humans react and respond to so that our service is prepared for them.

One of my favorite examples of this that we’ve done is the creation of Milestone Rewards, a loyalty program that rewards clients not for their loyalty to us, but for their loyalty to their own financial plan and portfolio. To the best of my knowledge, when we launched it in 2015 it was the first of its kind. The press picked up the story back then and ever since we really haven’t said much about it.

Today, I am going to write the first public update we’ve ever done on the program, thanks to some analytics work by Nick Maggiulli, my firm’s head of data analytics.

When we first launched Milestone Rewards, it was because the idea came to us after reading an article by our friend Jason Zweig at the Wall Street Journal in 2015. Jason asked the question, (I’m paraphrasing) “Why doesn’t the asset management industry have any sort of fee-lowering mechanism like the loyalty programs of airlines and hotels?” In other words, should an investor who spends ten years in a mutual fund still be paying the same basis point fee year after year?

We thought about the idea in the context of our own clientele. We said to ourselves that if the best thing for a client would be to stay the course in a given strategy for long enough that it would really pay off for them, wouldn’t that make them a better client over time? Wouldn’t that make our jobs easier as the advisor? Of course it would. So what could we do, beyond the ongoing service that we already provide, to encourage this sort of good investor behavior.

We announced the program in September of 2015 and it took effect a year later.

Under the Milestone Rewards program, Ritholtz Wealth Management clients qualify for an approximately 15% reduction in their annual fee after their 36th month invested with the firm. And once the reduction kicks in, it’s forever. The first clients of the firm to hit the 36 month-mark did so in 2016 just as the firm itself was turning three years old. These were our original clients with whom we launched the company – what a fitting reward for our first adopters to have earned for themselves. We were really happy to have a way to say thank you, and to reinforce the positive behavioral traits that we work so hard to engender with our writing, speaking and messaging.

In the first quarter that the program began, our original 75 clients had become Milestone Rewards members. The following quarter, the MSR members grew to 86 households, and then in the next quarter it became 99, and so on. As each quarter passed, a new class joined the ranks of our incredibly savvy, well behaved, committed clientele. These are households that have demonstrated a dedication to the investment strategy we’ve chosen for them through the ups and downs of three years or more of market activity, and now they’re paying a lower AUM fee percentage. They’ve earned this by staying the course and not becoming distracted by rallies, corrections, shinier objects being jingled in their lines of sight, irrelevant commentary on offer in the media each day, etc.

The MSR client accounts are bigger, on average, than those of the clients who have not yet qualified, which I think might speak to the efficacy of the program – but I can’t be sure. Because accounts come into the firm from scratch at all different sizes, it’s not possible to draw any iron conclusions yet. I’ll be able to tell you something meaningful after perhaps ten years of MSR or more…

In 2019, we’re about to see a big jump in the number of MSR clients, and I couldn’t be more proud of our advisors and their clients for getting themselves there. 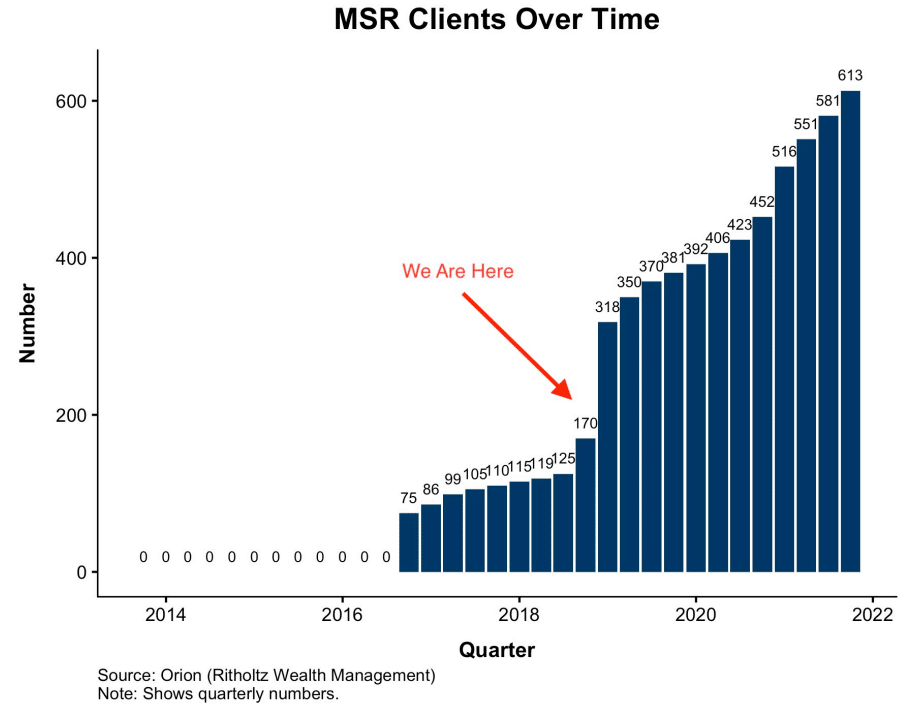 In 2019, we’re anticipating that 198 new households will qualify and enter the Milestone Rewards program. We’ll be at 350 families and foundations by next summer.

It’s a breathtaking leap, it means that more than half of our clients will be there by the end of the year. Of course, we cannot know this percentage for sure because if we continue to add new households at the current pace throughout 2019, the pie will have also gotten bigger. But just the idea that we could be rewarding over 500 households in MSR by year-end 2020 for their fidelity to their own financial plans is dizzying.

When we originally came up with the idea of doing this, it was like a bolt of lightning struck the room. It was obvious to Kris, Barry, Michael and I that the clients would love it and that it would be another powerful tool in our behavioral arsenal – but we couldn’t have known for sure. The data we’ve collected on retention and referrals and other metrics we track now makes it clear: Training investors to be the best version of themselves through tangible rewards is a win-win.

Talk to us about your portfolio and financial plan here.