I read lots of technical analysis research. A lot of it is produced by friends of mine (what’s up JC, Ari, Jon, Andy!). Some of it comes from large firms and some of it comes from independent traders. I don’t place trades based upon it but I use it inform my opinions and views.

Price is truth at any given moment, more so than any other indicator. It tells you exactly how your fellow market participants are acting, not what they’re saying or what they might someday do. Now, you can extrapolate this truth into a prediction, of course, but then you’re guessing just like everyone else. Nothing wrong with that, every investor is guessing about something. Some of us have better inputs for our guesses than others.

I think the starting point for any question about price in the future ought to begin with price in the present. This is not an endeavor to determine what a security is worth or what the underlying company’s or market’s fundamentals are. That’s a different question. This question is “What are investors doing now, what have they been doing in the recent past and how likely are they to continue doing what they are doing / have been doing?”

Aha, you say. Is there a trend or has a trend just ended? How can we determine whether or not a new trend has begun?

No one will agree on these things because everyone’s time frame is different. You can pick a time frame and chart it out in order to arrive at any answer you want. See this is bullish. Oh yeah, but this is bearish! Yes, but longer term still bullish.

So keeping things plain and simple, let’s agree that there was a glorious uptrend that began in the middle of 2016 after a difficult period beginning in 2015. This difficult period featured an earnings recession and an oil crash, during which more than half of the S&P 500’s components entered into single-stock bear markets of their own while the index flatlined thanks to outstanding performance from just a handful of large companies.

And then it ended during the summer of 2016 and stocks ran almost uninterrupted for more than three straight years, with just a single correction in January of this year.

When we faltered this past January, we had several scares during which the S&P 500 momentarily breached the psychologically relevant 200-day simple moving average. However, these downside breaches were swiftly repaired and the percentage of stocks below their own 200-day moving averages never quite rolled over.

That breach is distinctly different than the action we’re seeing during the current correction, which began at the start of October and is now ongoing for more than two full months. During this correction, the percentage of stocks above their own 200-day simple moving averages has, in fact, rolled over hard. It’s making new two-year lows and confirming the roll over in the market’s price. The components are telling the same story as the index this time. See below: 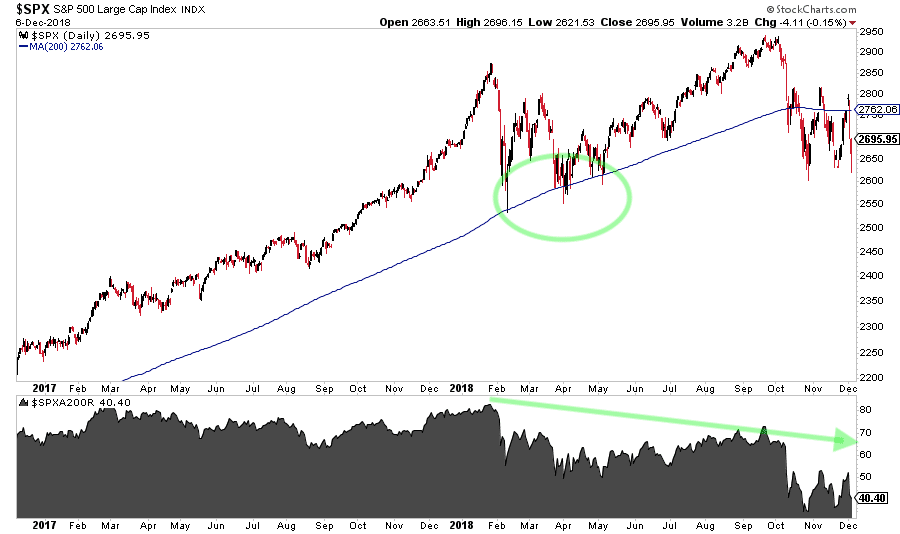 I’m showing the green ring around those scares from early in the year. In the bottom pane you’re seeing that the number of S&P 500 names that remained above their own 200-days remained healthy in the 60-ish percent range. Follow the green arrow to see how much more things have deteriorated in this plain and simple examination. There’s nothing fancy or esoteric about looking at the “market of stocks” this way.

Back to the top pane, magnified below…

You can see that there’s something about the 2800 level that seems to want to repel the bulls again and again. That’s three bounce attempts failing at the same level, three failures. Technicians refer to this as resistance. There is no magical significance being imparted upon “2800”, it’s just an area where we’ve seen sellers emerge repeatedly and buyers get nervous treading beyond.

If you believe that “price has memory” because price is a function of what people are doing and people have memory, then this is a level worth paying attention to. If you believe that it’s all random and that three times the 2800 level was sold coincidentally, then you can disregard all of this. Your choice.

But here are the facts:

We are now in a consolidation, and have been going back to February. That’s almost a year of no forward progress for the broad stock market averages.

The cyclical bull market we experienced from the midpoint of 2016 has not necessarily come to an end, but the market’s trend has definitively flatlined. Look at the slope of the 200-day moving average (a now non-existent slope) and there’s no denying this.

Internals are confirming the weakness in price. Now this is where some people would start whipping out all these other indicators for internals – new highs minus new lows, the NYSE Composite, small vs large caps, advance-decline line, etc. Fine. Use whatever you want, I prefer to see how many stocks are in uptrends vs not in uptrends.

Leadership is defensive. We can nitpick sector designations, of course, but at the end of the day, recent strength has accrued to areas of the market like health care, utilities, consumer staples stocks. Say whatever you want but these are stocks that long-only, fully invested institutional investors reach for when they feel the need to play more defense.

The September breakout to new highs looks increasingly like a false breakout or what the technicians refer to as a “failed move.” This can only be said in hindsight of course, but the further we travel from it in time, the more obvious this will become to everyone.

The choppy stock market features slightly above average volatility but not extraordinary levels of volatility. Below, you can see five years of daily price action with rolling 20-day standard deviation in the pane below. Elevated relative to last year but not crazy. Yet. 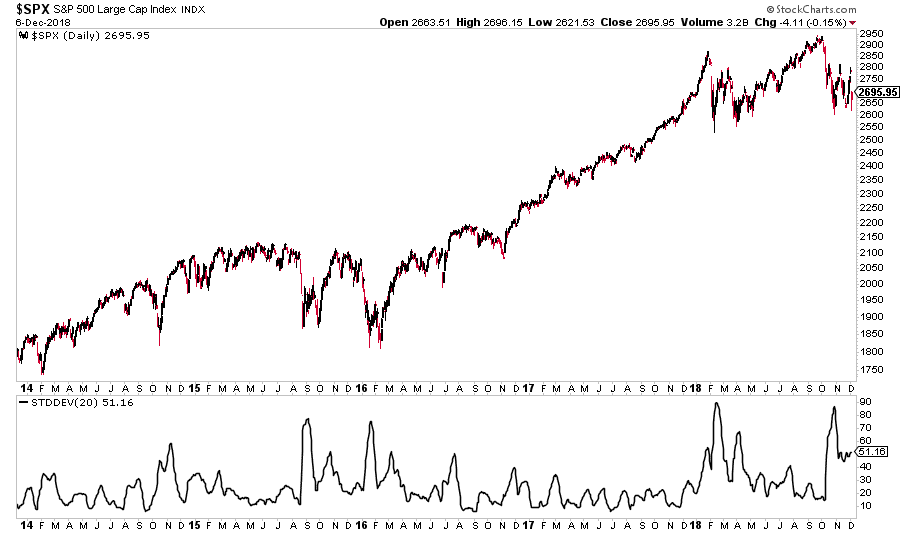 Finally, and this is where I extrapolate and hazard a guess, but I think it’s a reasonable one…

It will require an awful lot of sudden enthusiasm to see the S&P 500 take out its recent resistance of 2800 and then challenge the February / September highs. I don’t think we can do it. But it’s not terribly important for the market to make a new high this year. It might be a big enough victory for the bulls to see it finish with a consolidation and twin corrections that didn’t turn into full-blown bear markets.

The secular bull market that began in 2013 is still alive and well, despite the churn of 2018. And if, in hindsight, we determine that the cyclical bull that began in mid-2016 was killed this year, so be it.